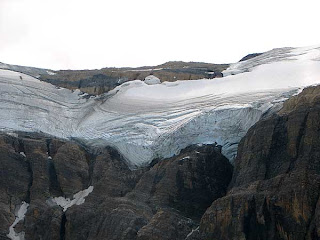 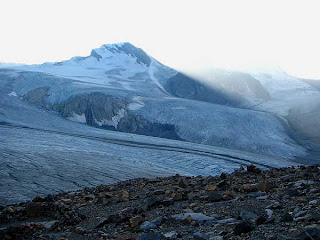 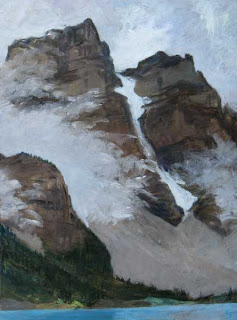 Please check out Greg's trip report on the Canadian Rockies along with a large number of paintings he has done at the following site : http://frux.net/galleries/rockies.html

Climbing in the Canadian Rockies 2009
By Gregory W. Frux

Matt Powell, Matt Burd and I (all AAC members) had the opportunity to visit Lake Louise. Yoho and Banff National Parks during August and September 2009. This was my third trip to western Canada and I was eager to share the charms of the area with two of my long- time climbing partners. We designed a trip where we travelled on our own for the first portion and with a guide service for several more technical objectives for the second half.

Our base of operation for much of the trip was the Lake Louise Hostel (http://www.alpineclubofcanada.ca/facility/cac.html) where AAC members get a discount and a warm welcome. You have to love a “hostel” with its own restaurant and bar! We had a superb warm up hike from Lake Louise to the Plain of Six Glaciers and the teahouse, from which we could see the Abbot Pass Hut, one of our later objectives.

On day three we shuttled our car to the end point of our hike, shouldered our 40 pound packs and set off from the north end of the Wapta Traverse, starting above Peyto Lake. We’d booked a total of six nights at 4 alpine club huts along the route and were using the traverse map sold by the Alpine Club of Canada. After about two and a half hours walking we were faced with a choice at a bridge across a torrent: our map showed two routes, the longer one crossed the bridge, while a more direct line continued up alongside the stream. While the direct route wasn't obvious, we convinced ourselves that a passable line could be made out to the gulley left of the rock buttress. Above this gulley, the 'route' got pretty frightening. We found ourselves on loose rock slopes which ended in a cliff hanging above a raging, icy torrent. It turned out that route we were on was used in the winter only, for ski touring. After two slow and tenuous hours on sliding rocks we climbed out of the gulley and reached the tongue of the glacier. From there access to the Wapta Icefield and Peyto Hut was easy. The vista from the hut is superb and the facilities extremely comfortable. We gave ourselves a treat and took a day off to lounge.

After our rest day we headed off across the Wapta Ice Sheet. Our plan was to traverse about 4 or 5 miles to the next shelter, the Bow Hut. The hike was going so well that we decided we had time to climb one of the nearby mountains enroute, South Rhondda (elevation 10,046 ft.). The summit was reached via 30 to 40 degree snow slopes and a ridgeline walk in the sky. In the meantime our gear, cached on the icefield, suffered a raid by ravens, the major casualty being a salami. The day turned more serious as we navigated towards the Bow Hut, via compass and GPS in a thunderstorm. The direct line route down led us into steep and hazardous terrain criss-crossed with large crevasses. Locating the hut took a little faith as it cannot be seen from the heavily creviced tongue of glacier that one descends to approach it. Fortunately an end run delivered us to solid ground and soon to the safety of Bow Hut.

We took another day off to rest, enjoy the view and reconsider our plans. We were growing concerned about the large number of big crevasses on the route. Ahead of us, two days further on was an area that was supposed to more difficult and dangerous. We heard that there had been less snow the previous winter and we saw lots of melting. [Yes, I think this is connected to global climate change]. We decided to shorten the traverse but to climb another peak before exiting-- Mt. Gordon, highest mountain in the range.

We regained the ice field and navigate towards the summit of Gordon, about three miles distant. To get there we cross a bergshrund on a snow bridge and climbed 40 degree snow sloops. We reached the summit without major difficulties at around 11:30 AM. (elevation ~10,500 ft). Return to Bow Hut was followed closely by rain and snow squalls and gale force winds. This made very appreciative of the wood stove at the hut. We exited the traverse the next day via a rugged trail down to Bow Lake, hitchhiking to pick up the car. After a restorative day at the Banff Hot Springs and a walk below the north face of Mount Temple, we were ready for our next adventure.

We met up with our climbing guides Dave Scott and Norman Winter and together took the shuttle bus to the justly famous Lake O'Hara. Our destination for the day was Abbott Pass Hut about 3000 feet above Lake O'Hara, enroute to climbing Mount Victoria. During our spectacular ascent we passed a mountain goat. We ignored the deteriorating weather, which devolved into a full on snow storm by the time we reached the hut. It was an interesting night, as we had elected not to carry sleeping bags, but to use the hut’s blankets instead. The real challenge was the exposed traverse to the outhouse, which everyone seemed to make several times that night! Next morning conditions were no better and after waiting until noon we retreated. Even the next day there were still lenticular clouds over Mt. Victoria.

After the retreat, we took the extra day to go rock climbing at the famous cliffs at Yamuneska, climbing The Keel Haul Wall (5.6), six pitches. This served as warm up for our last route of the trip, Brewers Buttress (5.6), 13 pitches on Castle Mountain. A three thousand foot hike and scramble put us on a ledge system for a stay at one of Canada’s smallest Alpine Club Huts, fitting six, perhaps http://www.alpineclubofcanada.ca/facility/castle.html. This allowed our diminished team, Matt Burd, Guide Dave Scott and I to make a predawn start of the climb. The limestone arête was extremely aesthetic, user friendly and airy. For speed Dave belayed us on a single rope for the first ten pitches, with Greg trailing the second rope. We switched to two ropes for several awkward chimneys near the top of the climb. The summit was reached in time for lunch. We encountered two hikers at the summit, revealing an easier, if longer way to the top. The protracted descent involved down climbing scree, several short rappels and a long hike to the bottom, arriving at dusk. Meantime Matt Powell and Norman Winters meantime successfully ascended Ha Ling Peak via a technical rock route.

Many thanks to the Alpine Club of Canada for their great facilities and to our fine guides Dave Scott and Norman Winter at Revelstoke Alpine Adventures. http://www.revelstokealpine.ca/
Posted by Conor at 8:54 PM