Three AAC members, Janet Morgan, Matt Powell and Gregory Frux travelled to Peru’s Cordillera Blanca for a trekking, climbing and painting trip in August 2011. The program was ably supported by the team from Ted Alexander’s Huaraz-based company, Skyline Adventures.
Frux and Morgan arrived early, acclimatizing in Huaraz (elev. 10,000 ft) and at the Lazy Dog Inn (elev. 12,000 ft.). They were delighted to witness the harvesting of quinoa, as well as the traditional methods of threshing wheat by having horses trample the grain. While at the inn, Frux and Morgan painted various views of the Cordillera, including views up the Llaca Valley.

After Mr. Powell arrived the trio undertook a trek up the Cojup Valley. Enroute they witnessed teams of porters carrying in 100 pound pipe sections, up valley for 9 miles. The project the porters are working on is an attempt to lower the level of a rising glacial lake at the top of the valley. Increasing water level and instability of the glacier above are due to dramatic warming of the region. The program is an attempt to make the valley and area downstream less vulnerable to cataclysmic flooding.

After reaching the head of the valley, Powell and Frux continued climbing for two days and crossed over a pass, which included glacier travel, to reach the Ishinca Valley. The high point of the route was 17,200 ft., and involved bypassing a small cornice on the descent. The next day Matt Powell climbed Nevado Ishinca (18,143 ft) with guide Alejo Lazzati. The main technical difficulties were at the summit block, where the team had to cross a bergshrund and climb a short vertical pitch. Greg, who was feeling the altitude stayed at Ishinca high camp. While at this camp he painted an oil painting of massive face of Ranrapalca (20,211 ft). 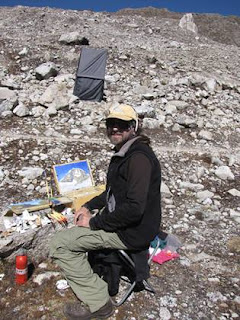 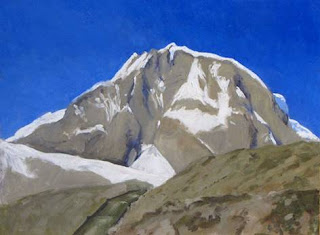 The team descended to the main Ishinca camp and met up with Janet Morgan who had descended the Cojup Valley and hiked up the Ishinca Valley. The team stayed at this dramatic location several days, with Frux and Morgan doing additional paintings of the surrounding peaks, waterfalls and indigenous forest.

Matt Powell descended first and travelled to the Llanganuco Valley. He made an attempt on Nevado Chopicalqui, reaching high camp at 18,200’ after two days. He reported that the upper mountain conditions have changed dramatically in the last three years, with a great increase in crevasses en route to high camp.

Janet and Greg returned to Huaraz. The following day Greg Frux drove into the Llaca Valley and began his climb from a very high trailhead at 14,500 ft. In the meantime, Janet painted at the dam above Lago Llaca. From the trailhead Greg climbed to high camp at the glacier’s edge at 16,120 ft. in about three hours. At 2:30am, Frux and guide “Nacho” Espinosa set out for the summit of Vallunaraju (18,655 ft.). The mild route was spiced by a field of nevado penitentes and one steep pitch to reach the summit block. In a perfectly choreographed ascent the summit was reached as the sun touched the peak. Climbers were back in Huaraz at mid day and the team safely returned to the USA after a very happy adventure.
Posted by Conor at 5:55 AM