Three AAC members, Janet Morgan, Matt Powell and Gregory Frux reunited for a third adventure of 2011, this time traveling to the Canadian Rockies for hiking, scrambling and painting during late August and September.

Powell and Frux’s original plan was to base climbs at the Alpine Club of Canada’s Neil Colgan Hut, the highest lodging in Canada. This program was sunk by weather on both coasts-- Hurricane Irene delayed a flight and then snow socked the Rockies. The team modified their program, basing themselves at a motel in lieu of the hut. They picked several 10,000 foot high peaks which could be hiked and scrambled as single day routes.

Their first mountain, Eiffel Peak (elev. 10,118 ft), was an adventure. Arriving early at the Moraine Lake trailhead they discovered a park service sign indicating that it was mandatory to travel in groups of four or more due to grizzly bear activity. Fortunately they were able to locate a couple in the parking lot that was also interested in the route. The climb started on good trails through deep forest above Moraine Lake. After climbing 1500 vertical feet they broke out of the forest and the cloud cover into alpine meadows for views of the lake and surrounding mountains. From this point they left the formal trail and began hiking up a gradual ridge into the sky. Only on the upper portion did it become a scramble. The last five hundred feet were a little sketchy because of snow covered rock, but careful route finding got them through a band of steeper rock via a gulley. A snowy system of ledges led the party to the summit, which yielded panoramic views of the range.

Matt Powell and Greg Frux next tagged Observation Peak (10,414 ft), which required nearly 4000 vertical feet of scrambling. A particular charm to the summit vista was the view of the Wapta Icefield, which the team had traversed two years earlier. Matt went on to climb the huge Mount Temple (11,624 ft.) solo, a route featuring a challenging 5600 feet of climbing, including class three and four terrain. Frux and Janet Morgan stayed at Lake Louise and did paintings of that massive mountain as well as Moraine Lake. The following day the team took a rest and visited Banff Hot Springs. 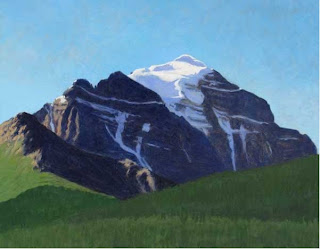 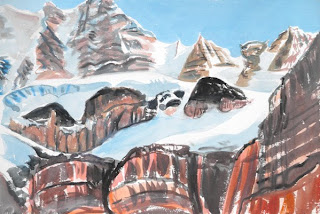 The last hike that the group did was up into the Little Yoho Valley, a location first explored by a party led by Edward Whymper in 1901. The route began at Takkakaw Falls, second highest waterfall in Canada, 1260 vertical feet of pulsing, bouncing cascades. The route was a gentle seven mile walk that climbed through primordial forests before gradually breaking out into alpine meadows surrounded by big peaks to the north and south, The team arrived at the ACC Stanley Mitchell Hut in early afternoon. Matt and Greg awoke at 4 AM and headed off to climb Mount President (10,296 ft). They reached the glacier at dawn and stood on top of the summit before ten a.m. It was another mountain with sweeping views up and down the Rockies and especially to the Wapta Ice Field. For Gregory Frux, this was his 65th summit over 10,000 feet and for Mr. Powell his 63rd. The descent was accomplished as rapidly as was safe, and after reuniting with Janet at the base of the climb, the group walked the seven miles out to the car, arriving at 6 PM.

At this point Matt Powell headed home. Janet and Greg stayed the ACC Elizabeth Parker Hut at Lake O’Hara for the next six days . This is a gem of the Canadian Rockies and Frux and Morgan were very fortunate to win a lottery to get lodging at the hut. They painted watercolor and oil paintings most days, and did two moderate hikes. The location is enhanced by superb trails, mostly constructed by Lawrence Grassi in the 1950s. He was a retired coal miner and alpinist who adored the place; he moved tons of rocks to create secure trails and even stairs along cliff sides and tops. Special thanks to the late Mr. Grassi and to the Alpine Club of Canada for their hospitality.
Posted by Conor at 9:44 AM